I came to Québec, as I have said previously, to write about the Battle of Québec in 1759. Unlike Thoreau, who came to Quebec City mainly on a sightseeing trip, my intentions were more serious as a disciplined military historian. To create balance with the more strenuous aspects of my writing on the nuances of war and diplomacy I use the arts, that is art and literature, and also photography, to explore aspects that people either shy away from or do not want to read about, as their lives are a daily grind in simply surviving. The history of war, the theory of war and the art of war are for those select few in this world who do not realize there is a tragic price to pay for such an interest. When I arrived on a very cold day in early December, with some patches of snow already on the ground, I was back in my element, not so much because of the city but because of Battlefields Park on the Plains of Abraham and another small park, known as Parc du Cavalier-du-Moulin.

It was to the smaller park that I went to meditate, and I call it the Garden of Gethsemane of the military historian, and for good reason. The small park is enclosed by a black wrought-iron fence and stands on the old fortifications, on which there are two small cannons trained over the modern City of Quebec. That is ironic, because cannons here first faced the St. Lawrence River, waiting for either British troops or colonialist American adventurers to attempt to take the city and the land all around it. The French fortification built in the 17th century is now gone, but the original defensive structure called “cavalier” was erected on Mont Carmel once a fortified hillock with walls and cannon to affront the enemy in the time of Montcalm. The old street of European design, Mont Carmel, is where I lived during my year of plague quarantine. It was to that small park that I would go to seek spiritual solace, when I was unsure of why I was writing about this battle, which I found to my dismay very few of the city's residents knew about. Indeed, many of the youths and the working-class people that I met and talked to had not been given the nourishment of their own great history.

To ward off my immediate task of working on the projected history that I had come here to write, I looked for ways to distract myself. I found those distractions in running along Plains of Abraham in the early morning and afternoon, then after a quick shower, I would read about the battle from the various sources I had brought with me, or I would read a Balzac novel, or go out into the Upper and Lower towns of Quebec City with my Leica and shoot photos in black and white. As the weeks begin to hint of the coming autumn, I would take my soccer ball and find a flat grassy area on Battlefields Park to play with the ball, moving back and forth effortlessly on the grass pretending it was a pitch, and it brought back memories of youth, and it also brought back the years as a football coach, when I was the most serene and happy in my life.

I frequented the cafés to meet people, and to look at the lovely women of Quebec City. There were two particular cafés, Cantook on Rue Saint-Jean and Les Cousins on Avenue Cartier, where I spent much time drinking coffee, reading, and occasionally writing down daily events in my journal. I rarely wrote in cafés, as my interest, like Tocqueville’s, was to observe people, ask them questions about their country and let them impress upon me their customs and culture as French Canadians – or Québécois, as the majority called themselves. Cantook Café had a rustic look, with its small, enclosed space and coffee bar with tall, comfortable chairs. Oak and pine cabinets were stocked with coffee and bags of coffee beans imported from around the world along with elegant coffee grinders, fashionable coffee cups and sweatshirts with the Chinook logo emblazoned on the back. It was like a throwback to the sixties in San Francisco or Paris during the student movement that Cartier-Bresson captured in his dazzling, historic photos. In these cafés I met a few professors and students with anarchist pretensions, while I noticed others who came there to flaunt their intellectual prowess; this made me smile, but I kept these observations to myself. The café staff were kind to me and put up with me not being able to speak French. One or two of the baristas were lovely, spirited women whom I enjoyed chatting with, but I never indulged in flirtation, as I knew that would lead nowhere. I wanted a French-Canadian woman but not the attendant melodrama. Therefore, I kept to myself, observing the way they primped their hair and how they wore their sweaters and bright scarves with a certain flair that would have been a bit flamboyant in Paris, but in Quebec City was a playful expression of art and sensuality.

I was often drawn to Les Cousins for its international ambience. It is a large Italian Restaurant and café that one could easily find in Milan or Florence. The walls are usually graced with the paintings of local artists, with tables that are close to each other so that people can meet, as they do in the cafés of Italy or France. There are Italian baked goods, a variety of French breads and croissants to be had, and most of the clientèle order single or double espressos. I always ordered an americano, as an espresso makes me hyper and then I have this urge to go out and run or more likely than not head for the nearest pitch to find a pick-up football match. It was at that splendid café that I was invited by the owner to have my first easel-painting exhibition. It was held in August, but I could not attend my own exhibit as the plague was in its first wave and the risk was too great for me. 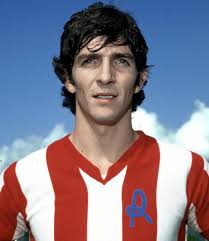 The manager, Samuel, and I struck up a friendship and we always bantered about football, especially the Series A Italian league, and we even discussed the greatness of Paolo Rossi, the famous striker who won the Golden Boot and European Player of the Year after winning the 1982 World Cup. I mention “Pablito” as he was famously known, because he died during the plague, but of an incurable illness that was kept quiet. That was a wise move on his wife’s part, as in the modern world too much is known of our lives, which only fuels gossip and inflicts emotional wounds. With Samuel, I could talk about football and keep it general, playful, and light. Samuel is an amateur photographer, so I gave him a copy of my published book of Paris photos, to show him that although football and women were the core of my interests most of the time, I also had time for the arts. I never discussed my more serious writing, for there was no place for that in this café. It was patronized by some serious intellectuals, but also by rich Québécois and tourists who went there to eat Italian dishes and to be seen. However, if one was able to get past the frivolous café crowd, it was a wonderful place. I frequented these two cafés until the plague made its appearance in March, when I stopped going to any cafés at all.

Click here to read the 1st part of this article.

The subjugation of one nation by another, colonialism, takes on various bodies and forms. Throughout history, the goals of colonialist nations may vary according to the socio-spatial environment, but in....

Chapter V PART I: My Caput Galeatum, and the Divine Québec SceneryWhen I was a young boy in Haysville, Kansas, my mother told not long after my father’s death that I was born with “a veil” over....

Lung cancer is one of the most common type of cancer with an approximate 1.59 million cases diagnosed in 2012 worldwide, and is by far one of the leading cause of cancer related deaths worldwide.Cimavax-EGF....

Mutumbaism: How the process of neoliberal globalization has turned Kenya into a second hand nation

Mutumba is a Kiswahili word that was originally used to refer to second hand clothes. This is because the first second hand commodities that were sold at a large scale were clothes. Now that today second....

Brazil on the brink of chaos

The events of the past days, with the resignation of the main members of Guedes' economic team early on Friday night, stirred up the analyses, moving and guiding the media.This mass layoff in particular,....

Shaw: ‘Those who are responsible for neocolonialism cannot pretend to bring the cure’

Danny Shaw, an American political analyst and professor at the City University of New York, spoke to The International about Haiti’s struggle for freedom. The Haitian Prime Minister Ariel Henry recently....