In 2022 the world Communist and Marxist movement has been shaken by events in Ukraine. Far differently from in the cases of twentieth-century Soviet interventions in Hungary, Czechoslovakia and elsewhere in Eastern Europe, today’s Russian Federation no longer makes even the slightest claim to being a Communist or workers’ state, or a defender of world peace and progress. Instead, Russian actions in Ukraine are being defended with the argument that the latter country must be “de-Nazified,” this without a universal understanding of what that seemingly astounding claim might mean in practice or sound to ordinary people in other nations with greatly differing historical experiences.

In this case, the misunderstanding is amplified by the existence of radically different worldwide understandings of what “Nazi” means in the twenty-first century. To the United States and in most of the West, “Nazi” evokes very specific images of swastikas, straight-armed salutes, millions of “marching morons” bringing death and destruction, and, above all, genocidal death camps and gas chambers. Today, if one would ask any hundred literate Americans, Canadians or Western Europeans on the street, “What were Hitler and the Nazis known for?” probably ninety-nine would answer, “They murdered six million Jews!” Not a few would spit on the ground or use some similar gesture of repudiation.

So, who and where are the Nazis today in Ukraine? One thing is certain: Thanks to the heroes of the Red Army, Hitler is dead. Hitler is very dead, seventy-some years gone, and with him died the original Nazi nightmare of brown shirts, swastikas, and death camps. So, who are we talking about in 2022?

A Google search done at the end of April, 2022 shows over 15,000 results for “Ukraine’s ‘Nazi problem,’” most of them acknowledging the reality of at least some neo-Nazi presence in today’s Ukraine. What does this reality mean in practice? If Nazis were primarily Jew-haters, how could this be if the president of Ukraine is a Jew? Is “Nazi” being used in this case as a shorthand for “anti-Russian,” no more?

To understand the current situation in a Marxist framework, given that neither Russia nor Ukraine can currently call itself a “workers’ state,” what is at stake in the current conflict between these two states is primarily nationalism, pure and simple. Bourgeois nationalism. Nationalism, like patriotism, can be progressive or reactionary. Soviet nationalism, particularly during what Stalin and the Soviets identified as the “Great Patriotic War” (World War II), was clearly progressive, fighting against fascism for the survival of socialism and the future of humanity. Even American patriotism during that period took a form that was objectively progressive, anti-Hitler, and thus pro-humanity.

However, within a couple of years after the end of World War II American nationalism became deeply reactionary, focused much more on defeating socialism at home and abroad than on learning the lessons of World War II. In stark contrast, Soviet nationalism retained a progressive character throughout the era of the Cold War, and up until the fall of the USSR. For postwar generations of Communists and progressives it became axiomatic that what Moscow stood more-or-less defined what was “progressive,” and what Moscow opposed was almost by definition “reactionary.” In spite of what was seen by many as significant “glitches” in the progressive model (e.g., the invasions of Hungary, and later of Czechoslovakia) and in spite of inexcusable splits in the world Communist movement (e.g., between the USSR and China), the Soviet red star remained the guiding light for most of the world’s Communists until the period of the collapse of the USSR in 1989-1991. 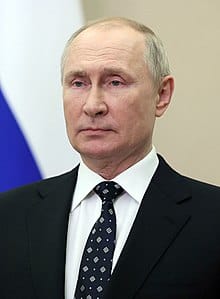 The successor state to the USSR, the Russian Federation, quickly banned and dismantled the former Communist Party of the Soviet Union, and adopted a stance that has oscillated from nostalgia for the USSR’s “great power” status in the world, to world leadership of a twenty-first century world shift toward right-wing “populism,” anticommunism, autocracy and reaction. For example, at this writing there is wide and vigorous discussion among American progressive and liberal activists about to what degree the ever-more-reactionary Republican Party of Donald Trump has become in fact the “party of Putin!”

Sadly, the mere fact of US and NATO opposition to Russian actions in Ukraine does not by necessarily make what is happening there in any way “progressive.” The old fallacy that “the enemy of my enemy is my friend,” has been (or should have been) repeatedly disproven in recent practice by deeply reactionary anti-imperialist forces ranging from the Iranian Ayatollahs, to ISIS, to the Taliban.

As Sam Webb, respected former leader of the Communist Party USA, wrote just a week ago addressing this very point, “the just anti-imperialist struggle of the Ukrainian people” evokes “the imperative of global solidarity expressed by millions of people worldwide for the people of Ukraine.” A few days earlier, Webb had written that “I have no hesitation about expressing complete solidarity with the people and organizations in Russian society, whose goal is to ‘remove’ Putin and his dictatorial regime from power. I would hope other democratic, progressive and socialist minded people think much the same.”

Though Webb’s opinions are his own and do not necessarily correspond to the line of the current CPUSA, he remains an “elder statesman” of the American Left and his thoughts cannot be lightly dismissed. However, as yet another contemporary Communist writer astutely observed, the situation in Ukraine is above all, “complicated.” There are many possible legitimate ways in which Communists and leftists throughout the world can react to this complicated and world-threatening situation.

However, it is never the place of foreign progressives to seek to dictate or meddle with the methods, tactics and ideological lines of foreign Communist and progressive movements. For generations this been the practice, or at least the stated ideal, of Communist and workers’ parties throughout the world, even though occasionally observed as much in the breach as in the practice.

At this point, without swallowing the entire marginal (and, many would say, now largely outdated) ideological construct of Maoism, it is useful for today’s Communist activists to recall and understand what Mao once correctly identified as the qualitative difference between “antagonistic” and “non-antagonistic” contradictions, focusing in this specific case on differences within the world Communist movement itself. In the ultimate analysis, “antagonistic” contradictions are those in which one side seeks to defeat, smash, destroy, and ultimately, eliminate an “enemy” and his/her ideas. In stark contrast, “non-antagonistic” contradictions are to be best settled cooperatively, by means of comradely criticism, frank discussion, socialist respect, mutual strengthening, and support for a broad diversity of ideas and understandings within our movement. Antagonistic, destructive contradictions are most properly those that exist between Communists and their class-enemies: capitalists, slaveholders, aristocrats and all exploiters, militarists, imperialists, racists, sexists, fascists, traitors and Nazis. Non-antagonistic, and thus potentially creative contradictions are those existing (or that ought to exist!) between and among Communists of different nations, cultures, and backgrounds, and with those non-Communist progressives, socialists and non-party activists, forces and organizations who concur to one degree or another with the goals of the common progressive movement.

So what does this all mean for today’s world Communist movement and its intellectuals, leadership and activists? First of all, it demands a comradely mutual respect for differences of analysis and line. The online magazine in which this editorial appears is a new generation’s effort toward greater unity, comradeship and solidarity. Though different and contradictory analyses may appear to challenge one (or many!) parties’ possible lines on a difficult question like that of Ukraine, the ultimate goal is always one that is shared: That of working class liberation. Workers of the world, unite! You have nothing to lose but your chains, and a world to win! Keep your eyes on the prize.

In all Western capitalist states, labour incomes and their purchasing power are declining. This is true for precariously employed low-wage workers up to the middle classes, and this again especially for....

The Uyghurs and Anti-China Propaganda

On August 26th 2022 as the US-NATO directed counter-offensive against the Donbass Republics and other Ukrainian regions resisting the NATO installed Nazi friendly regime in Kiev began to take place, the....

There was a nationwide general strike today in the largest democracy of the world, India, at the call of all central left and democratic trade unions although existence of democracy is under serious....

Afghanistan in the Hands of Taliban, Again!

Najibullah, a Soviet-backed president, came to power in Afghanistan in the 1980s. Although political peace did not return, for a very short time, at least women's freedom did take hold. Beautiful Afghan....

Leftists are taking lead in the Ecuadorean Presidential Elections

Leftists are taking lead in the Ecuadorian Presidential Elections. Ecuadorian economist and the leftist leader of “Citizen Revolution Movement”, Andres Arauz on Sunday won a first-round victory in....