In conversation with Dmitri Kovalevich

Dmitri is a Ukrainian journalist and activist of the banned communist organization 'Borotba'.

The organization was banned in 2014 for active protests against pro-US coup and against legalization of neo-Nazism. It was banned along with the Communist party. It acts illegally in Ukraine and legally in Donbas republics (Donetsk and Lugansk). His organization supported Donbass rebels in the civil conflict which lasts since pro-US coup in 2014.

The International: How would you explain the events unfurling in Ukraine right now?

Dmitri Kovalevich: The current events are a continuation of the Donbass conflict which has been going on since 2014. For years Kyiv media and West MSM used to tell that Ukraine was confronting the Russian invasion - and now that happened in reality - as soon as Russia recognized the republics. The official stated aim of the operation: 'denazification of Ukraine'. Donbass republics seceded in 2014 exactly because they were outraged by legalization of WW2 Nazi collaborators of Ukrainian origin.

The International: Was the situation inevitable? Could it have been resolved through a series of negotiations?

Dmitri Kovalevich: The negotiations have been going on since 2014. Ukraine twice signed the Minsk agreement but refused to fulfill them fearing that armed neo-Nazis would overthrow the government like in 2014. The Minsk agreement implied the reintegration of Donbass republics back in Ukraine but providing the special autonomy status with right to have their own cultural and language policy. This was unacceptable for our radical nationalists who would like to see unified and monoethnic pro-Nazi Ukraine. So, it is either communists are banned and here or Nazis. There is no third option.

The International: How are the Ukrainians dealing with this?

Dmitri Kovalevich: There are some 5-6% of Ukrainians sharing pro-nationalist or pro-Nazi ideology. There are some 5-6% of commited communists or sympathizers. The rest support those who are winning at the moment. Last years millions of Ukrainians migrated: some 3.5 million to Russia and they would like to come back in case of change of the government. Some 3.5 - labor migrants in western countries, they tend to share Western media narratives.

The International: What ramifications will this have for the Donbass Republics?

Dmitri Kovalevich: I suppose they will be a sort of independent countries like Abkhazia, South Ossethia, Transnistria. Since Ukraine refused from Minsk agreements, they will not come back, given also much blood spilt within 8 years which divide Kiev and Donetsk. 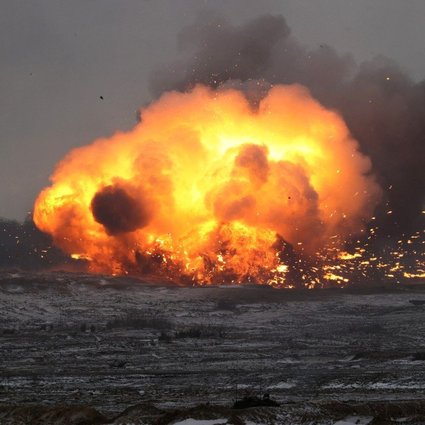 The International: So far everyone has been playing the blame game and rooting for either of the sides. Is there something that the media has hidden from the public?

Dmitri Kovalevich: The main thing hidden from the public is that there are numbers of outright Nazis integrated into Ukraine's army, police and National Guard. The Ukrainian education system brainwashes children glorifying WW2 Nazis and blaming Soviets. West media preferred to ignore the daily shelling of Donbass cities and the resistance of Donetsk coal-miners, but are outraged when only when pro-US side is being bombed.

The International: If the NATO pushes back, is there a possibility of a full-scale war?

Dmitri Kovalevich: I can't predict that. But definitely, it's a new war between pro-NATO and anti-NATO sides. There are deep changes on the geopolitical level and the First World countries face economic crisis. The only way they see in a conflict is profiting on arms trade and sales. They are also to show for the Third World countries that US/UK are still strong to impose their imperialist agenda, especially after fails in Afghanistan). A possible loss of any pro-NATO force or country may enforce further economic conflict within the First World countries providing more opportunities to the Third world countries to improve their economic situation.

Taiwan: US deployment area against mainland China - since 1945

Under U.S. guidance, the regime of Generalissimo Chiang Kai-Shek was installed in Taiwan beginning in 1945: He had already been supported by the USA in the 1920s, then also by Hitler's Germany. Taiwan....

Stalin, The Man of Steel and an Epic Saga on The Banks of Volga Through Times

71 years ago, in 1941, Hitler started his long-cherished operation Barbarossa to crush his ideological nemesis, the Soviet Union and get access to its vast resources. With 3 million soldiers and a massive....

Hungary’s tango with the far right is not new. An intoxicating cocktail of anti Semitism coupled with a hearty dose of the red scare, Hungary’s Arrow Cross Party rose to power in 1944. Though a short-lived....

In Defense of Cuba and its Revolution

Cuba has made astonishing advances since its historic 1959 revolution. It stands proud as a sovereign citadel of socialism just a hundred miles (160 km) from the coast of a hostile, ever-threatening imperialist....

The story that unfolds below begins in a spring, goes through supermarket shelves, ends in celebrities’ toilets, and starts again. This vicious circle, from the bottom to the flush and vice versa, is....

Protest against Israeli occupation in the Syrian territory of Golan Heights

On 9th December 2020, a demonstration was organized by the people of Masada village in the Syrian Golan Heights territory to demand the Israeli occupation authorities to stop installing wind turbine fans....